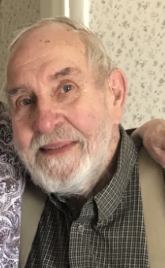 Kurt Edward “Buck” Heide, 80, of Wolverine, MI, passed away, on Monday, June 20, 2022, leaving his earthly body for his eternal home in Heaven, with Jesus. He is now reunited with his beloved wife, Karen.

Kurt, known as “Buck,” by those who knew him, was born on July 17, 1941, to Kurt and Laura (Sass) Heide. He grew up with his younger sister, Lynn, in Utica, MI. He helped his father in the family taxidermy and gun shop, ‘Heide and Kidd,’ until the family moved to Wolverine, MI, where they started Game Haven Wildlife Ranch, Taxidermy, and Gun Shop.

In 1963, Buck married Karen Carlson, of Gaylord. They had a son, Scott Richard, and a daughter, Kriston Lynn. In his earlier years, he and his father would put on exhibition shooting shows in many areas, including Game Haven. Along with being an avid hunter, trapper, and fisherman, Buck also won many shooting competitions. Most of his life was spent creating taxidermy mounts and gunsmithing when he wasn’t taking care of the animals at Game Haven.

In 1992, he and his wife, Karen, along with friends, started the Joy Fellowship Food Pantry. The pantry became their heart and soul; following Jesus in Matthew 25:35-40. Buck continued to oversee the pantry until his last breath. His love for Jesus was evident in his life’s journey.

Preceding him in death were his parents, Kurt and Laura Heide; his wife, Karen; and his son, Scott.

A celebration of Kurt’s life will be held at a later date.

In lieu of flowers, memorial contributions may be made to the family, to be used at their discretion, through the Nelson Funeral Home, PO Box 1548 Gaylord, MI, 49734.

We love you all!

Funeral arrangements were entrusted to the Nelson Funeral Home and Cremation Service in Gaylord.