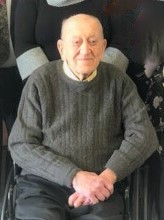 Bill was born in Detroit, Michigan, to William E. and Margaret (Ritter) Tholl. He graduated from St. David’s Catholic Elementary School and attended De La Salle Collegiate High School where he graduated in 1947. He enlisted in the United States Navy at 17 years of age, serving in World War II.

He began his tool and die career by completing an apprenticeship at Hudson Motor Company in Detroit, Michigan, in 1951. He continued his trade working with small companies using his artistic and precision skills.

On January 28, 1950, he married the love of his life, Mary Ellen (DeSantis), in Detroit, Michigan. They lived in Detroit until moving to Gaylord, Michigan in November 1955. Bill owned and operated a beverage distributorship from 1956 until 1960. He returned to his tool and die occupation working for Standard Products, where he retired in 1989.

He was committed to his civic duties. He served many terms on the Gaylord City Council and the Otsego County Fire Board. His objective to serve on the council was an example of his lifestyle commitment to raise his family in a community that was safe, healthy, and had a high standard for pride in one’s living environment.

He lived his deep Catholic faith to the fullest, which was shown in his actions in the volunteer work at St. Mary Cathedral and Schools. His home was always open to friends and his children’s friends. There was always plenty of love for everyone. He was a member of the Fourth Degree of the Knights of Columbus.

He loved the summer months, where he could work in his garden and manicure his landscape. He loved spending his retirement traveling and spending time with Mary Ellen and his beloved family.

A Mass of Christian Burial will be held on Thursday, December 30, 2021, at 11:00 a.m. at St. Mary Cathedral in Gaylord, MI, with visitation at the cathedral, beginning at 10:00 a.m. The Mass will be available for viewing on the cathedral’s website at www.gaylordstmary.org.

The burial will be held at a later date, in the spring.

In lieu of flowers, memorial contributions may be made to Gaylord St. Mary Cathedral Schools or St. Mary’s Catholic School in Sault Ste. Marie, MI.