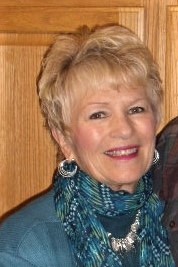 Virginia “Ginny” Kay Carey was called to her heavenly home on Tuesday, October 6, 2020. She passed away peacefully at Munson Medical Center in Traverse City after valiantly battling cancer for 5 years.

Ginny was born May 5, 1948, in Flint MI to Violet Louise (DeForest) and Harry W. Moore. On November 5, 1966, she married Mercer “Bud” L. Carey and together they raised their son Leon A. Carey in East Jordan.

Ginny is survived by her husband, Bud Carey of East Jordan, son, Leon (Lisa) Carey of East Jordan, grandson, Matthew (Mandi) Carey of Boyne City, and brother, Ken (Kathy) Moore of Williamsburg. Ginny was greatly anticipating the birth of her first great-grandchild who is expected to arrive any day now to parents Matthew and Mandi Carey.

She was preceded in death by her parents;  Harry and Louise Moore, brothers;  Dennis and Cliff Moore, and granddaughter;  Ashlee Marie Carey,  who forever remains in our hearts as Angel Ashlee.

The guiding force in Ginny’s life was shaped by three strong pillars: Faith, Family, and Friends. These guideposts helped her to live a life that, while cut short, was one of JOY and completeness. She tried to live her life by treating those around her with love and kindness.

The landslide of support and memories from those whose lives Ginny touched is everywhere throughout our community and on social media. It is a true testimony to the power and impact that a caring and an engaged person can have on the lives of others. She believed it and she lived it. Although we know we will join her again in Heaven someday if we remember the kindness and love she showed everyone, and in turn, touch others with that same love and kindness, she will truly continue to live with us today!

Her loving husband, Bud, often said “if you ‘stub your toe’ or go through a hard place in life, you are likely to receive a note of encouragement from Gin”. Ginny was widely known for sending cards and notes, not only for special occasions but whenever she felt someone needed some cheer.  She continued to send those notes, even while in pain, and just days before she left us.

In lieu of memorial contributions, Ginny requested that each of you contribute by showing random acts of kindness to those around you.   And that you gather as often as possible with your treasured friends and family to simply enjoy an evening filled with music, laughter, and love.  She often shared “I am determined to be cheerful and happy in whatever situation I may be in, for I have learned from experience that the greater part of our happiness or misery,  depends on our attitude and not on our circumstances!  May the JOY that you give to others, be the Joy that comes back to you today.”

Ginny was blessed with two church families and shared her musical talents for many years at both the Lighthouse Missionary Church in East Jordan and the Barnard Methodist Church in Charlevoix.  She served in many organizations to support the community she loved.  A few include: The Little League Auxiliary, United Way of East Jordan and she had perfect attendance, for 20 plus years, with the East Jordan Lioness Club. She was awarded the East Jordan Citizen of the Year in 2002, was elected president of the East Jordan Business & Professional Women’s Club in 1980-81 and was named Woman of the Year in 1979.

A memorial service is scheduled at 11:00 a.m. Friday, October 16, 2020, at the Lighthouse Missionary Church located at 7824 Rogers Rd. East Jordan, MI with Pastor Bart Adams and Pastor Craig Pahl officiating. We invite you to join the family following the service for a luncheon and time of sharing.