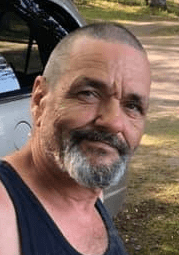 Todd James Morey was born on May 22, 1966, to William Elmer and Beverly May (Fults) Morey, and he entered eternal rest on October 17, 2020, at the age of 54.  During his marriage to Penny Erowen he had two children, James & Melissa Morey. He also had two children from his second marriage to Beverly Drabik, Michael Drabik, and Austin Morey.

Todd loved his family.  He liked to take long hikes in the woods, loved picking mushrooms and cutting wood.  He was a meat cutter by trade.  He enjoyed many nights sitting by a bonfire and drinking beer.

He is survived by all his children; also, by his father, William E. Morey; one brother, Bill Joe Morey; and three sisters, Patricia Carrillo, Amanda (Harvey) Lick, Vanessa (Ty) Alma. He is also survived by many nieces, nephews, and grandchildren, as well as his life partner, Amanda Lynn Seabolt.

Todd is preceded in death by his mother, Beverly, and his brother, Timothy Morey.

There will be a graveside service at Hallock Cemetery at 11:00 a.m. on October 31, 2020 with a luncheon to follow at the Frederic Township Hall in Frederic, Michigan.

In lieu of flowers, memorial donations can be made to the family through The Nelson Funeral Home.