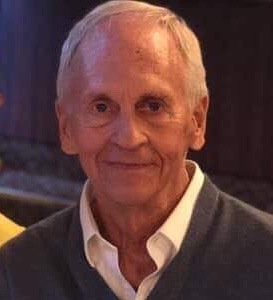 Terry Eugene Palm, 74, entered into God’s keeping at his home on February 14, 2020, following a cancer-related illness.

He was born on April 3, 1945, in Flint, Michigan, the younger son of Gus George Palm and Ina Linnea Palm (nee Magnuson), immigrants from Sweden.

After graduating from Southwestern Community High School, Terry was employed by Buick Motor Company, then drafted into the U.S. Army and stationed at Fort Sam, San Antonio.  The Army recognized his potential as a medic. Terry excelled in working in the amputee and burns unit at Brooks General Hospital during the Vietnam era.   At the end of two years of service, he returned to Flint and Buick.

Later, he decided to follow his dream. Terry moved to Islamorada – sports fishing capital of the world – the Florida Keys, where he began as a captain’s mate at Bud ‘N Mary’s and was later awarded his United States Coast Guard license to captain and navigate passenger-carrying vessels.   That was the start of his magical journey as captain of private charter and sports fishing boats.  He was known as “Captain Clean” and was also a highly skilled diesel engine mechanic.

After 45 years in the Keys, Terry decided to return to Gaylord, Northern Michigan, and pursue his other passions, fly fishing, and dancing. He especially loved salsa and argentine tango.  He moved to the beautiful community of Michaywe.  After some months, Terry met his partner, Corinne Reed Clancy, originally from England, who then lived on Hilton Head Island, SC.

Terry was preceded in death by his father, Gus and older brother, Robert Palm, and subsequently by his mother, Ina, who passed at 102 years of age.

Terry was a humble man, but he cut a dashing figure on the dance floor with his dazzling personality and beguiling smile.  He will be greatly missed by all who knew him and especially by his beloved partner of 5 ½ years, Corinne.  He leaves behind many cousins in South Dakota and lifelong friends, Ron Bodette and wife Lana.  Also, Corinne’s family who adored him  – one especially, Corinne’s nephew, Graham Reed.

Terry will be cremated, and his ashes interred at Eden Cemetery, Hudson, South Dakota, alongside his mother and father and other family members, on a date yet to be determined.

A “Dance for Terry” will celebrate his life at Zoe’s Dance Studio in Petoskey.  Date to be confirmed.

In lieu of flowers, memorial contributions may be made to Otsego County – The Humane Society, 225 W. Main Street, Gaylord, MI