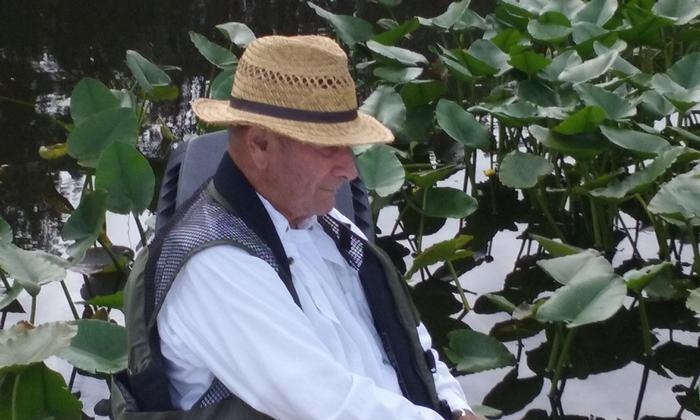 Vergil Dean Sanders age 86, formerly a longtime resident of Gaylord and most recently Florida, passed away on June 2, 2017 after losing his battle with cancer.  He was surrounded by his family at the home of his daughter Pam (Mark) Heiler, in North Carolina.

He was a veteran of the U.S. Army and proudly served in the Korean War.

Vergil was a mason contractor in Gaylord. He worked on many schools, churches, sidewalks, basements, driveways and more. He also designed beautiful stonework and brickwork.

He loved to deer hunt and looked forward to hunting each year. He and his hunting buddies would go to the U.P. for the entire 2-week season. They started out with a simple shanty and gradually saved to buy a deer camp with a cabin and property. He hunted with Don Seidell (brother in-law), Craig Seidell (nephew), Ron Lackey (son in-law), Todd and Seth Seidell (his nephew’s sons), Royal Lackey (son in-law’s Dad). They made many, many good memories.

Vergil and his wife Sally traveled out west for many years. They loved to go to Laughlin, Nevada. Later they started traveling south to Florida and camping for quite a few years. Eventually they started to rent until they bought a small place in Lake Placid.

He loved building bird houses and feeders. He enjoyed garage sales where he would buy furniture to repurpose and paint. He liked an occasional game of poker, ice cream and chocolate.

He will be greatly missed. He had a huge kind heart. His loving smile was contagious, when he smiled, everyone smiled. Those who knew him would agree, he was such a sweet man.