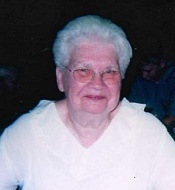 RoseEdna (Burkett) Babcock, age 87, of Wolverine, Michigan, passed away on November 20, 2019, at home surrounded by family.

In RoseEdna’s junior year, her family moved to the Wolverine area. She married Dwain Babcock on August 24, 1952.

RoseEdna worked at the family business, Babcock Builders, Inc., both in the office and in decorating spec homes.

She was baptized, along with her husband Dwain, on May 4, 1952, as a Jehovah’s Witness. She attended many large conventions, including two at Yankee Stadium. She loved engaging in door-to-door preaching when she was in good health and later encouraging others using the Scriptures by letter-writing. She was very active in her faith right up until her death.

She enjoyed gardening, crocheting, cooking, sewing, and reading. She loved keeping in touch with family and friends by letter, social media, email, and text.

A memorial service will be held Sunday, December 1, 2019 at 4:00 p.m. at the Vanderbilt Kingdom Hall of Jehovah’s Witnesses in Vanderbilt, Michigan.

The family would like to express their great appreciation to Dr. John Deidrich, who oversaw RoseEdna’s care for years as well as the hospice members who enabled her to pass away in the comfort of her home.

In lieu of flowers memorial contributions may be made to the worldwide work of Jehovah’s Witnesses or Hospice of Michigan through the Nelson Funeral Home, PO Box 1548, Gaylord, Michigan 49734,