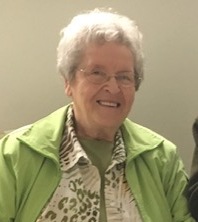 Rose lived her entire life in Gaylord. She attended the Big Lake School. Rose’s mom Suzann Wolney died when Rose was a baby, so her grandmother Victoria Nowaczyk raised her. When Victoria became ill, Rose left school in the seventh grade to care for her.

Rose worked at the Sugar Bowl Restaurant where she met head chef Harry Tomaski. They were married by Monsignor Kaminski on February 23, 1955, and remained married for 56 years until Harry’s death on June 5, 2010. The Knights of Columbus Council #2781 named them “Family of the Year” in 1989.

The couple had six children, but sweet Rose was like a mother to everyone. Her goal in life was to feed family, friends, and anyone who walked in the door. She made huge meals appear – almost like magic. Rose and her friend Irene Kujawa catered weddings and funerals for decades. Rose worked innumerable St. Mary Friday Fish Fries. She was a member of the St. Mary Cathedral Parish, St. Mary’s Altar Rosary Society, and the Otsego Memorial Hospital Auxiliary.

Rose could sew, knit and garden, but Rosie’s life was defined by her kindness and unconditional love of her family. Rose never judged or held grudges. She was just plain sweet. Harry and Rose were also blessed with devoted friends with whom they shared Sunday drives, birthday celebrations and card games. Since Harry died, Rose has gone on adventures far and outings near with her children and grandchildren.

She was preceded in death by her husband Harry Tomaski; parents Frank Z. and Suzann (Borowiak) Wolney; and siblings Mack, Floyd and Leona Lenartowicz.

Visitation will be held Tuesday, December 11, 4-8 p.m. at the Nelson Funeral Home. The Altar Rosary Society will recite the rosary at 6 p.m. Visitation begins at 10 a.m. Wednesday,

December 12 at St. Mary Cathedral followed by a funeral Mass at 11 a.m. Burial will take place in the spring at the Resurrection Cemetery in Vanderbilt.

Memorials to the St. Mary’s Altar Rosary Society or the Otsego Memorial Hospital Auxiliary may be made through the Nelson Funeral Home, P.O. Box 1548, Gaylord, MI 49734.