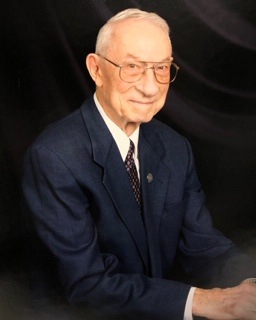 Keith was born to Orrie and Rula Catt on May 2, 1923, in Freeport, Michigan.  He graduated from Kalkaska High School in 1940.  In 1941, he was accepted into the US Merchant Marine Academy. Two months later,  after Pearl Harbor was attacked, Keith was assigned to an Army Transport ship, where he served for nearly a year.  In May of 1943, he returned to the Academy and received his commission serving until 1946.   In the fall of 1946, Keith enrolled at the University of Michigan, where he met the love of his life, Eileen Wubbena. Keith and Eileen began dating in January, 1947.  They married in September of 1947.

Keith graduated from U-M and was accepted into Graduate School, but his plans changed when he went for Naval Reserve Training and was drawn back into active duty in the Navy, where he served until 1959, retiring with the rank of Commander.

In 1959, Keith accepted a position working with his brother, C. Glen Catt, at Glen’s Markets.  He served as Vice President of the company, retiring from Glen’s in 1983.

Keith was  predeceased by his brother, C. Glen Catt.

A memorial service will be held on Friday, December 21, at 11 AM, at the First United Methodist Church in Gaylord, with Rev. John Naile and Rev. Dan Bowman officiating.  Visitation will be one hour prior to service.  The family is being cared for by Nelson Funeral Home.