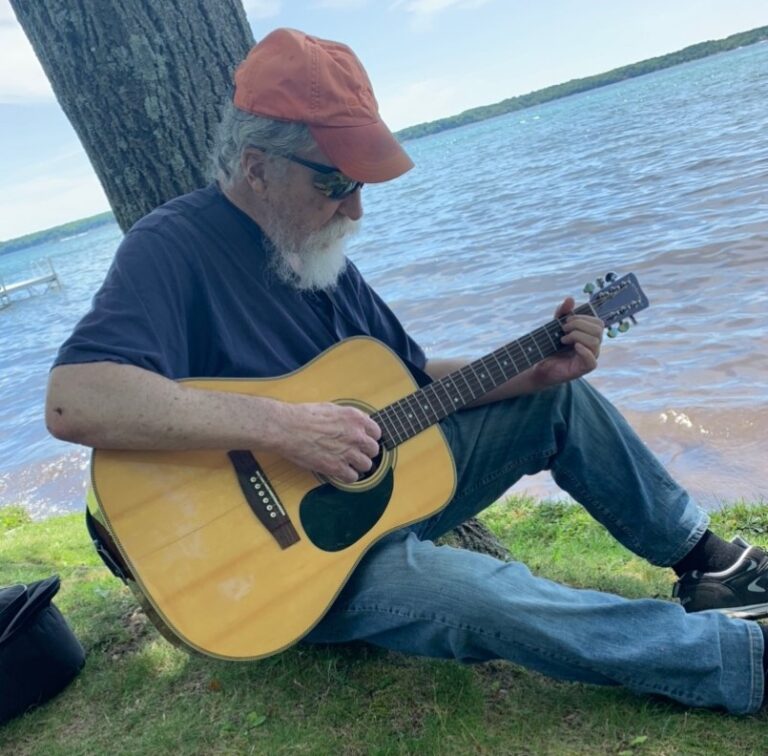 Robert was born in Flint, Michigan, on November 19, 1944, the fifth child of six children of Carl and Gladys Griffith. He grew up in Bellaire, Michigan, and attended Bellaire Public Schools, K-12, graduating in 1963. He studied music at Northwestern Michigan College.

He was preceded in death by his parents Carl and Gladys Griffith, and two sisters, Janet and June Griffith Geary.

Robert worked at various jobs around Bellaire. He served in the US Army and was honorably discharged. Robert loved the natural beauty of Bellaire and Antrim County and would travel the backroads and lakesides, often walking or hitchhiking while carrying his guitar. That is how he came to be known as ‘Walking Bob.’

Robert gained a folk-legend status around the Bellaire area, playing his guitar and singing at the local open mics or in a park or along the roadside. He wrote over 3,600 songs during a fifty-year period from 1970-2021. Much of Robert’s work has been lost, written on scraps of paper or in notebooks. In the latter period of his career, he often improvised songs, creating rich narratives that were sung and left behind. Some of it did get recorded on cassettes or CDs. He produced many CDs at his own expense and gave them away.

Bob Dylan was an inspiration. His later music was also inspired by the old African American bluesmen of the 1920s and 1930s, such as Robert Johnson and Lead Belly. These two inspirations–Dylan and the early bluesmen–help us to know Robert better, for it is in his music that he revealed his soul.  He had an extraordinary voice, loud, strong, and melodic. He often sang about the personal pain of his past, redemption, and God. Robert was a true bluesman and storyteller.