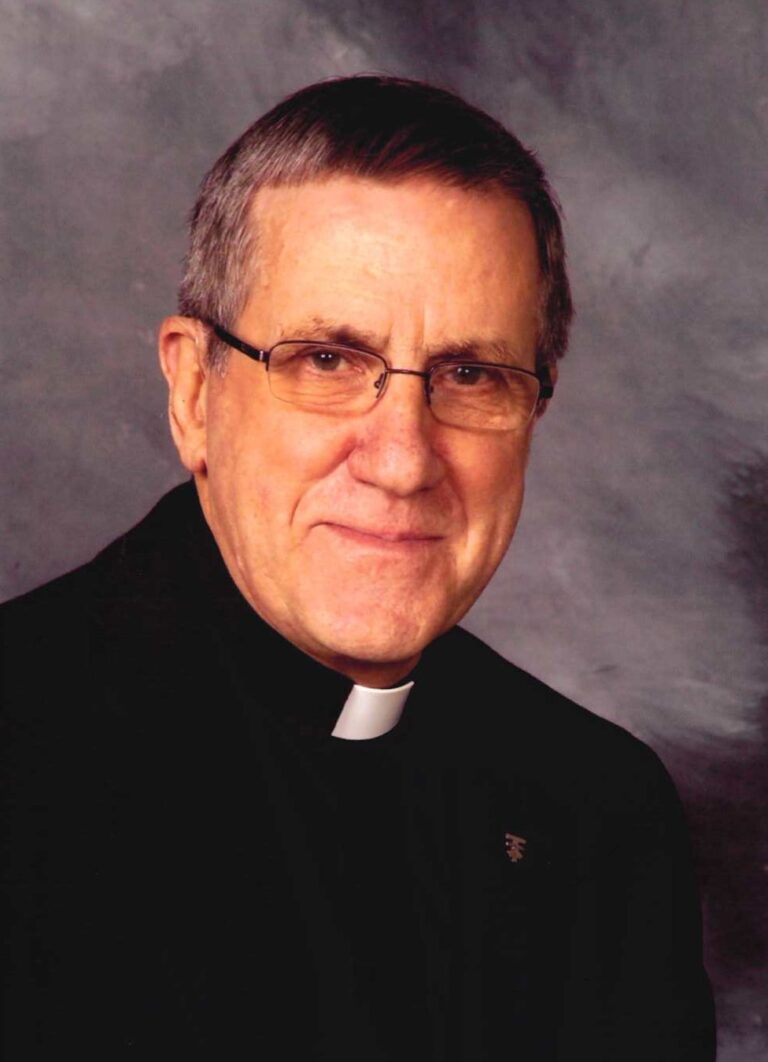 Reverend Chester “Chet” Collins, age 77, of Gaylord, Michigan, passed away unexpectedly at his home, on Tuesday, January 10, 2023.
Father Chet was born on September 15, 1945, in Flint, Michigan, the son of Louis and Gladys (Conroy) Collins.
He was a 1963 graduate of St. Mary High School in Gaylord. He then attended Flint Community College and later graduated from Central Michigan University. He taught in the Whittemore-Prescott School system for three years, before enlisting in the US Navy. After his discharge from the Navy, he attended a saddle-making school in Oregon. Sometime later he returned to Gaylord where he worked various jobs and retired from the Gaylord Post Office after 25 years of service. After retirement, he entered the seminary and was ordained a priest on January 12, 2013. He was currently the pastor of St. Anthony of Padua Catholic Church, Mancelona, and St. Luke the Evangelist Catholic Church, Bellaire.
Previous priestly assignments include Father Chet’s ministry as parochial vicar of St. Matthew, Boyne City; St. Augustine, Boyne Falls; St. John Nepomucene, Praga; St. Mary of Mt. Carmel Shrine, St. Joseph, and Guardian Angels, Manistee; and administrator of St. Luke the Evangelist, Bellaire and St. Joseph, East Jordan.
Father Chet is survived by three siblings, Joyceann (Joseph) Burgdorf, Barbara Jean Collins, and Vern (Chris) Collins, all of Gaylord; five nieces and nephews, Robert (Vicki) Burgdorf, Jeff (Heather Schrems) Collins, Scott Collins, Matt (Michelle) Collins, and Michelle (Saun) Keister; several great-nieces and -nephews.
He was preceded in death by his parents, Louis and Gladys.
A Mass of Christian Burial will be held on Tuesday, January 17, 2023, at 11:00 a.m. from St. Mary Cathedral in Gaylord, with The Most Reverend Jeffrey J. Walsh, Bishop of Gaylord, presiding.
Visitation will be held at the Nelson Funeral Home on Monday, January 16, 2023, from 4:00 p.m. until 8:00 p.m.
Our Lady of Mount Carmel Secular Franciscans will offer a tribute, at the Nelson Funeral Home on Monday, January 16, 2023, at 5:30 p.m., followed by a Knights of Columbus Rosary at 6:00 p.m.
Visitation will continue Tuesday, January 17, 2023, at St. Mary Cathedral, from 10:00 a.m., until the time of Mass at 11:00 a.m.
Interment will be held on Saturday, January 21, 2023, at 11:00 a.m. at Fairview Cemetery in Linden, Michigan.

Contributions in memory of Father Chet may be made to St. Mary Cathedral Schools, through the Nelson Funeral Home, PO Box 1548, Gaylord MI 49734.