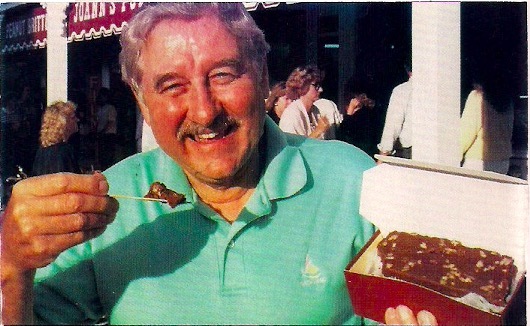 Frank Nephew passed away in Gaylord surrounded by his loving family on Sunday, April 29, 2018, at the age of 88.  Francis Roy Alfred Nephew was born August 18, 1929 in Lovells, Michigan.  He graduated in 1947 from Gaylord High School, where he was a mediocre student and an exceptional athlete.  He was the quarterback of the football team, a starting guard on the basketball team, and a shortstop and catcher on the baseball team.  It is rumored that he ran in a track meet and entered a tennis tournament where he won medals in both events. In 1949 he married Joan Carol Reinhardt, a beloved only child from Boyne City, Michigan, whose father reassured her she could always come home if the marriage didn’t work out.  As a young man, he bought a book on how to box, and subsequently won the Northern Michigan Golden Gloves boxing tournament in the Lightweight Division.  His favorite sport was baseball and he played semi-pro baseball in Detroit.  He had a tryout for a minor league team and claimed his only shortfall was that he needed a stronger arm.  Within 15 minutes of being introduced to one of his future sons-in law, he felt it necessary to get on the floor to demonstrate how to do a proper “hook slide.”

Frank always wanted to be an entrepreneur, and his first business was the Log Mark Lounge in Detroit in 1964, followed by the Rumble Seat Lounge in 1968 – both buildings he built himself from the ground up.  His relationship with Mackinac Island began in 1953 when he built the Tastee Freeze building for his high school friend Bob Benser.  In 1966 Frank moved his family to Mackinac Island to manage The Pickle Barrel Restaurant.  He subsequently bought the building next to McNally Cottage in 1969 (currently The Main Street Inn and Suites) and in 1970 the Joann’s Fudge and Mighty Mac Restaurant building.  In the 1980’s, with Bob Benser, he purchased what is now The Lilac Tree Suites and Spa and the Chippewa Hotel Waterfront.  You could not walk with Frank down the street without several people rushing over to greet him. He was an integral and fiercely devoted part of his community and spent his entire life growing the places he loved.  If you visited him in his office in his later years, he was almost always eating ice cream and watching baseball.

Frank’s life was never ordinary – in fact it was always extraordinary.  When his parents moved from Northern Michigan to the Detroit area to look for work in the mid 1940’s, Frank decided to live with an aunt and attend school in Gaylord.  By the 11th grade, he lived on his own in an apartment in Gaylord, and supported himself by working multiple jobs after school and sports practice. He was always an optimist, a generous friend, and a devoted husband and father.  Frank loved and cherished Joan from the moment he met her.  Together they built a beautiful life  – one that was, like Frank’s famous fudge shop named after Joan, filled with candy and love and happiness.  When going through his notes recently, we found a piece of paper that had several short thoughts written down that he kept for inspiration: “handle money well” – “make a deal” – “live the same with money as you did without” – “don’t ever give up” – “have confidence” – “keep dreams alive.”

One of his grandchildren wrote a wonderful note to the rest of the family which sums up who Frank was and how much his family loved him.

“Grandpa was extraordinary. Truly. Not every good person has a great life. Not every successful person has love and happiness. Not every successful man (and in fact very few) is gracious and generous. Not every charismatic and hardworking person figures out how to direct those talents effectively. Somehow Grandpa had all of these things and more: he had a loving partnership with his wife, he had children and grandchildren he got to know for much longer than most, he moved and shook his way to an incredible amount of success, he got to feel the validation and fulfillment of creating and owning his own business, and was, without a doubt, the most generous person that I have ever met or will ever meet. His success never restricted him, but instead, he used it to be an even better person and he did so consciously. That all sounds like a cliché because what I just described is the ideal life by any standards – and grandpa actually lived it. He is a true inspiration to me.

Another grandchild added, “He built an incredible business that we all feel so emotionally connected to. It defines our childhood. But beyond that, he built such an amazing family. We are so much closer than most, and it is because we came from an incredibly strong foundation. A little bit of him is in all of us. And that should make us all feel pretty special.”

He was preceded in death by his brother Lovell Monnie Nephew and his son-in-law Armin Porter.

A memorial service will be held on June 19, 2018 at Ste. Anne Catholic Church on Mackinac Island at 11 AM with a luncheon to follow.