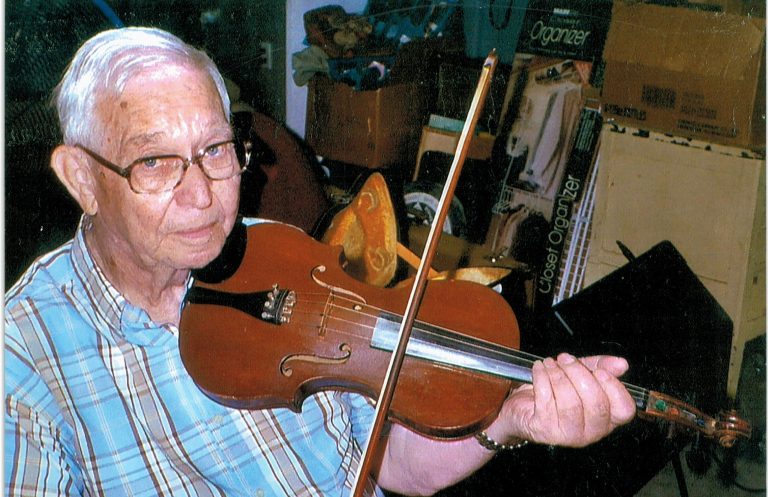 Austin was born in Ladelle, Arkansas on September 1, 1921 to Henry “Homer” and Lena (Howsen) Myers.    On August 23, 1941 he married the love of his life, Geneva, with whom he just celebrated 76 years together.   He proudly served his country in the United States Navy.

Austin loved life.  Anytime he was with people he was a happy man.  He was passionate about music and was a proud member of the Old Michigan Fiddlers Organization.  Playing old time music was a favorite way to pass away the time.  He instilled a love of music to his children and grandchildren.  Austin enjoyed the great outdoors while hunting and fishing.   He was a farmer, worked at Ford Motor Company and later became a construction carpenter which he retired from after 40 plus years.  Austin was proud of his family and loved children so much that even after raising 9 of their own children he and Geneva became foster parents.  He was a proud member and supporter of the VFW and American Legion.  Religion was always a priority and he made sure his children were walking the right path.  His children remember many easy, heart felt conversations with him about the choices they were making.  His love for family has left a strong legacy for generations to come.

Funeral services will be held on Friday, February 16, 2018 at 2 PM from the Nelson Funeral Home and Cremation Service in Gaylord.

Visitation at the funeral home will be on Friday beginning at 11 AM until the time of service.

Memorial contributions in his honor may be made to the Johannesburg Christian Church in Johannesburg, MI.

Arrangements have been entrusted to the Nelson Funeral Home and Cremation Service, P.O. Box 1548, Gaylord, MI 49734.