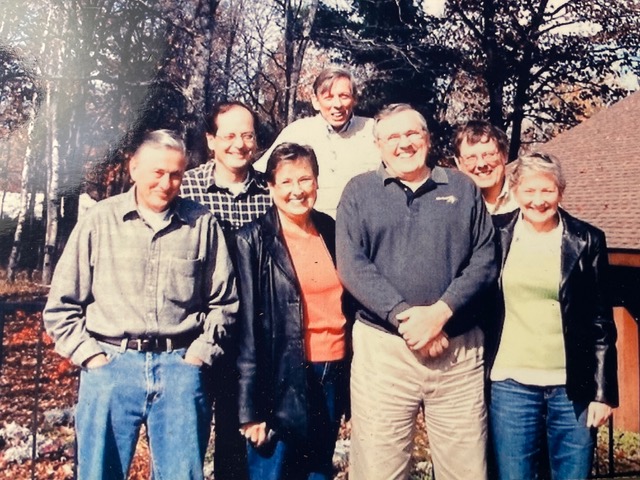 Milton J. Boyd, Jr., passed away peacefully, Thursday, February 3, 2022, in Gaylord, Michigan. He is survived by siblings, Jane Sperry, Vance, and Greg, and numerous nieces and nephews. His loving wife, Marilyn, has preceded him in death.

Milt was born on September 17, 1932, in Grosse Pointe, Michigan to Milton and Elisabeth (Krause) Boyd. He was the first of seven children, all of whom kept in close touch while he and his wife Marilyn enjoyed their careers and life path.

During his youth, Milt spent part of his early summers at Camp Sancta Maria, in Gaylord, to be followed later, his brother Bruce, living in the John Bosco lodge, and learning fellowship, sailing, baseball, and other sports.

After his early studies at St. Paul Catholic School, Milt attended and graduated from De La Salle Catholic Preparatory High School in Detroit. A devout Catholic, Milt later attended Sacred Heart Seminary in Detroit, studying liberal arts, including philosophy, Latin and the Catholic liturgy. Milt went on to earn a baccalaureate degree at the University of Detroit, later married, and worked briefly at Trans World Airlines, before finding his career calling: teaching at South Lake High School in St. Clair Shores, Michigan. While pursuing his teaching career, Milt studied at the University of Michigan in Ann Arbor, completing his Master of Arts.

The Detroit Boat Club on the Detroit River provided a home base for the high school, and the school kept a number of sculls and shells there. Milt competed as an oarsman in both four and eight-man crews for De La Salle Collegiate.

During the summers, while at college, Milt worked as a deck hand on Ford Motor Company freighters hauling iron ore from Duluth to the River Rouge plant in Detroit. The ore was smelted into steel, and return. Milt swabbed decks and helped load and off load the cargo, occasionally having to take shelter during gale force winds on Lake Superior.

At the University of Detroit, Milt competed in track. He held the university record, for many years, in the high jump, at 6 feet, and prior to new innovations in jumping styles.

While teaching, and during quiet hours at home, Milt built an entire small gauge railroad, over the space of two ping pong tables, with towns and some homes and buildings that he assembled from paper, complete with windows, and elaborate wooden mountain trestles built from scratch, not a kit. He was featured, with his work, and photographed in railroad magazines and as a member of the Mt. Clemens Railroad Club.

Milt also earned his pilot license and joined a flying club. Their plane was kept at Detroit City Airport, just across the road from his old high school. As a student, he would watch planes take off and land while standing on the school’s athletic fields. That experience inspired him, later, to fly one of those planes.

Once, while in the air, Milt faced a challenge when cruising in for a landing, one wheel failed to drop. Alerted by his dash indicators and by the airport tower, Milt pulled up, suddenly, just prior to landing. To counter the risk of fire, Milt decided then to spend the fuel he had and land the plane like a glider.

All incoming and outgoing air traffic at the airport, including commuter flights from several national airlines, were halted while Milt circled the airport for almost two hours, using what fuel was left in the tank, waiting for the moment when his engine stopped.

Working with ground control, Milt needed to carefully adjust his distance and location, in the vicinity, so that he had ample runway in front just as his tank emptied. Firetrucks waited at one end of the airport. In reviewing his options with the flight tower, Milt had decided to land, with just one wheel down, on the grass median rather than the concrete strip. Finally, running out of gas and with no propellor, Milt’s plane glided in complete silence towards the grass. At good speed, he was able to keep one wing higher at touchdown, using the single wheel to slow his advance. The plane eventually spun out with landing gear, fuselage, and propellor damage but no harm to the pilot or airport employees. Milt was congratulated by airport personnel and fire crews for his patience and his cool head, before a debriefing and his report to FAA officials.

After his retirement from teaching, Milt and Marilyn bought a second home in St. Lucie, Florida, at the PGA Village, and lived there during the winter season. He and Marilyn were often visited by family members there.

While spending summers, over more than 40 years, at Michaywe, Milt officiated at many golf tournaments and was included in the good fellowship of golfers and staff. Even the wait staff at the clubhouse and the Michaywe Inn-the-Woods restaurant often were delighted with Milt and Marilyn’s frequent visits. Both Milt and Marilyn loved living at Michaywe, with its collegial atmosphere. They organized entire family reunions there, with members flying in from around the country, and hosted day trips to Mackinac Island. Milt’s family members are grateful that he was able to finish his last days, at his and Marilyn’s lovely home, in Michaywe.

For many years, Milt and Marilyn enjoyed celebrations, weddings, and reunions with those in his extended family in Michigan, Florida, Texas and New York.

Milt was a true gentleman, contributing his knowledge and wisdom to hundreds of high school students, friends, colleagues, and family members over the years. Both he and Marilyn had wonderful senses of humor. Though a “Michigan” man through and through, he always took U-M losses in stride, even when they lost to Michigan State. Milt was dearly loved by so many he touched with his easy manner and cheery demeanor.  He will be sorely missed and fondly remembered, for many years.

Visitation will be held at St. Mary Cathedral beginning at 10:30 a.m. until the time of services.

In lieu of flowers, memorial contributions may be made to De La Salle Collegiate High School in Warren, Michigan, online at https://www.delasallehs.com/support-de-la-salle or to St. Mary Cathedral Schools online at https://stmarycathedralnlcc.weshareonline.org/ws/opportunities/SchoolSupport.