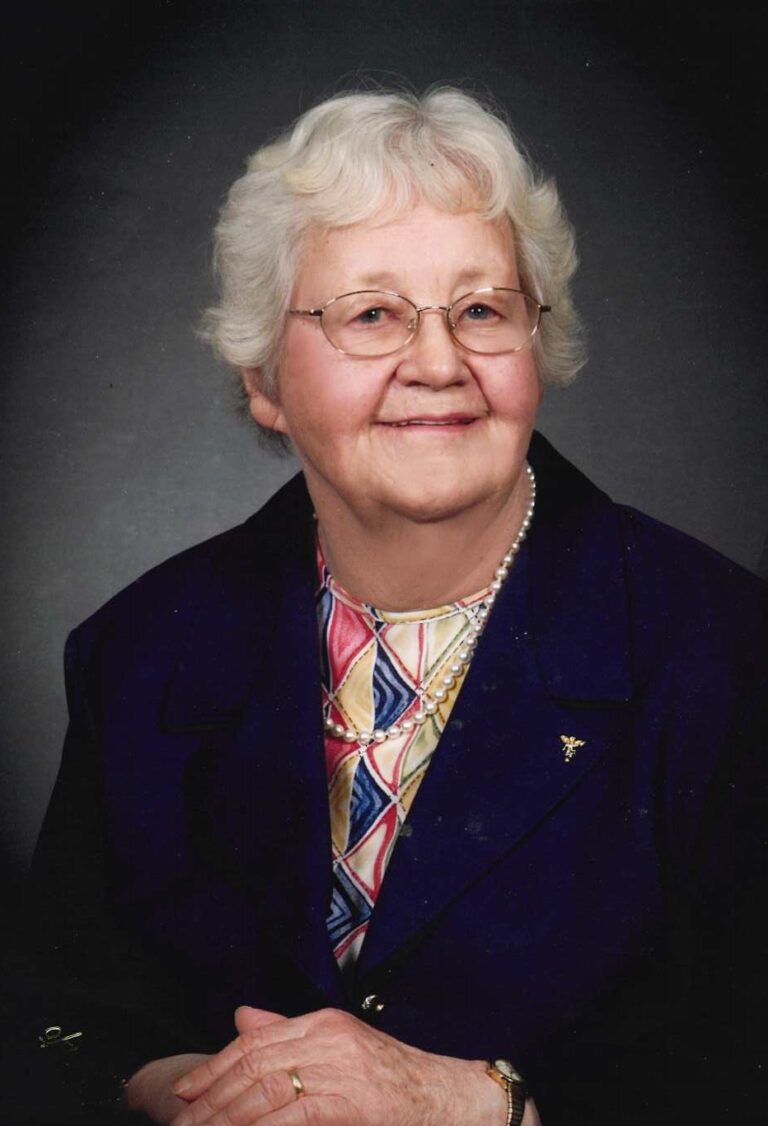 The family of Lillie Bell Simpson, who died peacefully on March 23, 2022, at age 98, will gather on June 11, 2022, for her private interment at Fairview Cemetery in Gaylord.  Friends are invited to celebrate Lillie Bell’s life immediately following the interment at the Eagles Hall at 515 S Wisconsin Ave, Gaylord, MI 49735 starting at 12:30 p.m.

She was born on August 9, 1923, at home in Elmira Township, Michigan, to Raymond and Ellen (Olund) Moorehead. She was the fourth of their eight children. As a young girl, she attended the Shaff one-room schoolhouse in the Elmira area, and later Elmira School and Gaylord High school.

During WWII, Lillie Bell helped the war effort in Saginaw, by working in the gun and ammunition division, building armory for the military. After the war, she returned to Gaylord where she spent the remainder of her long life.

In 1947, she married the love of her life, Calvin “Red” Simpson, and together they raised seven children. They were busy parents attending school programs, sporting events, and fundraisers. As a dedicated homemaker, Lillie Bell was a great cook, especially for holiday meals. She also canned many jars of fruits, jams and jellies, and vegetables for the long winters.

Both Red and Lillie Bell were members of the First United Methodist Church and were very active with the Fraternal Order of Eagles and the Eagles Auxiliary, Gaylord Chapter #1825. She served in many Auxiliary leadership positions over the years and provided thousands of volunteer hours for activities and events at the Eagles Hall.

Red passed away in 1984, leaving a huge void in her life, yet she kept busy with her family and friends. With her incredible vivid memory until her death, she contributed valuable historical information for news articles and accurate recollections of early Gaylord years, through interviews with the Otsego County Historical Society.

Lillie Bell was preceded in death by her parents; her beloved husband, Red; brothers, Lester and Raymond Jr; and sisters, Eleanor, Martha, and Shirley.

The family extends deep gratitude to the staff at Aspen Ridge Assisted Living and Hospice of Michigan, for their attentive and kind care of Lillie Bell.

At this time, the family has chosen to remember Lillie Bell privately. There will be a memorial gathering on June 11, 2022, at the Eagles Hall in Gaylord, following a 12:00 p.m. internment at Fairview Cemetery in Gaylord.

Please share your memories and personal messages at www.nelsonsfuneralhome.com.