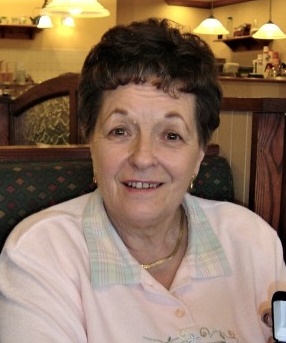 Judith “Judy” Joanne Mellon passed away at 87 while battling dementia on August 9, 2021.

On December 28, 1933, Judy was born in Lafayette, Indiana, to Russell and Ruby (Snyder) Ensinger. She graduated from Bay View High School in Milwaukee, Wisconsin, and majored in the arts. She loved all types of dance, with her mother making all of her costumes. She entered a dance contest in Milwaukee, winning 1st place and a $150 prize, a lot of money in 1952!

She met her future husband, Dr. Dennis Mellon, at the city bus stop on South Pine Avenue near where she went to work as a bookkeeper. Dennis was attending Marquette University at the time. They married on January 2, 1954, at the Immaculate Conception Catholic Church in Milwaukee.

Over the years that followed, the happy couple lived in Indianapolis, Indiana, and Munising, Michigan, before eventually moving to Gaylord, Michigan, where they resided for over 60 years, raising a family of 7 children. While Dennis ran a thriving Chiropractic practice from their home office, Judy kept busy with the kids and their church; St. Mary’s, where she was involved with the Daughters of Isabella as Secretary for several years. She helped the Gaylord Little League, where she spent countless hours running the concessions while the family played baseball and softball. She was also involved with fundraising efforts for the St. Mary’s Athletic Association.

Judy liked Polka dancing and square dancing in her spare time, especially around the annual Alpenfest festival in Gaylord. She also enjoyed crocheting and made countless afghans for family and friends.

After the passing of their 16-year-old son Mark, who was involved in a tragic motorcycle accident in 1980, Judy’s husband Dennis became an accomplished triathlete, a sport requiring tremendous dedication and support. Judy accompanied Dennis to numerous triathlons around the state and country, eventually qualifying and participating in the world-renowned Iron Man Triathlon in Hawaii (twice) and the Boston Marathon. From this passion, and in memory of their son gone too soon, the couple was inspired to create the Mark Mellon Memorial Triathlon in their hometown of Gaylord. Judy managed all of the mailings, grab bags, and timing for the event, which was a year-long process that eventually became one of the premier and longest running triathlon events in Michigan.

We want to mention longtime dear friends Don, Lisa, and Marie for all the card games and casino trips with our parents and our amazing cousins Jan and Lynn, who became cruise buddies with our folks. And of course, the close friendship with our Dad’s Brother, Dr. Robert Mellon, wife Elizabeth (Michigan), and their entire family.  All of these beautiful people enriched all of our lives beyond measure.

A special heartfelt THANK YOU to the staff at Parkside Assisted Living and Memory Cottage in Port Charlotte for their unwavering care of our mother over the past several years and, of course, the angels at Tidwell Hospice for their staff’s extraordinary care of Judy over the last month.