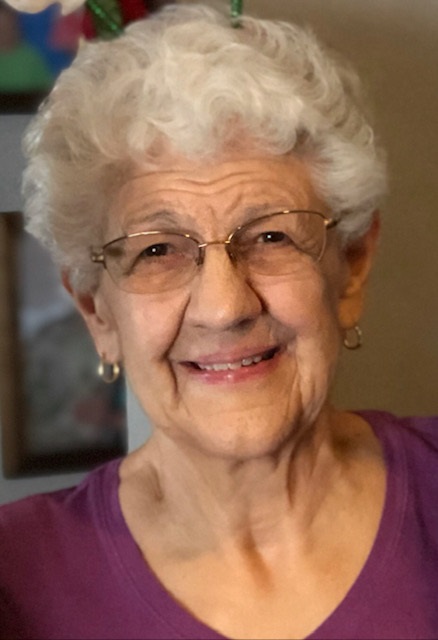 She was born December 31, 1932, in Oil City, Pennsylvania to Rev. Dwight and Wilda Montgomery, JoAnne lived her first 17 years in Pennsylvania. In 1950, after graduation, she attended Vennard College in Oskaloosa, Iowa where in May 1954, she graduated with a Bachelor of Arts in Religion.

On June 3, 1954, she married Kenneth Pike from Caro, Michigan who was the father of her three children, Robert Pike (deceased), Susan (Richard) Sumampow of Johannesburg, Michigan, and Debra Pike of Monroe, Michigan. They parted ways in 1976. Joanne continued to work in banking as an auditor for several banks until 1997 when she retired and returned to Johannesburg, Michigan. JoAnne met her current soulmate, Eber Wolf, at the First United Methodist Church in the spring of 2002. They were married in September of 2003 and have been by each other’s side since.

JoAnne was extremely active as a volunteer in her Gaylord community. She loved volunteering at RSVP and at her church, First United Methodist. She was a daily walker at the Otsego County Sportsplex, logging close to 16,000 miles! JoAnne was always on the go visiting family and trying to never miss an event. She was a wonderful mother, grandmother, wife, and friend. Her love shined on all who were near her. Her family and friends were everything to her and kept her very busy. Her presence will be dearly missed and will leave a huge void in their lives.

In lieu of flowers, memorial contributions may be made to First United Methodist Church, or the Otsego County Sportsplex, through Nelson Funeral Home and Cremation Service, PO Box 1548, Gaylord, MI 49734.