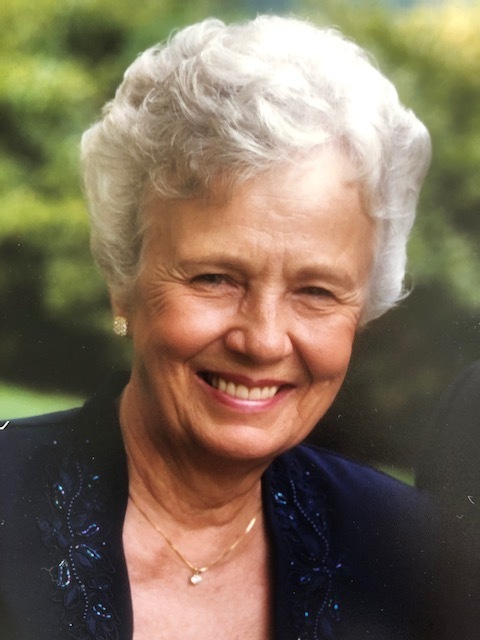 Joan attended St Mary Catholic School in Cortland and Cortland High School, graduating in 1943. She was accepted into the Syracuse University three-year nursing program during WWII and became a licensed RN following the War.   She married her husband, Robert T. Westerman, a WWII Marine veteran in 1947.  Together they helped care for Joan’s younger siblings following the untimely deaths of both Thomas and Ruth Walsh until moving to Canandaigua, NY, in 1950.

Joan worked as a staff nurse at the VA Hospital in Canandaigua and then the VA Hospital in Battle Creek, MI, where she became a supervisor, until retiring to New Port Richey, FL in 1981 with her husband.  They remained married for 57 years until Robert’s death on April 27, 2004.

The couple had three children and nine grandchildren. Together with being a mother and taking care of her children, Joan was an avid reader and was always looking to take classes to learn new things, from art and stained-glass creations to gardening, knitting, and needlepoint. Her home held a library filled with wonderful books for her family about art history, crafts, science, religion, American history, The Civil War and World Wars, Shakespeare, fiction, and many other famous authors, artists, and historical figures. Her collection of Peanuts books was a favorite among her children. Joan was also an avid scrapper, accumulating numerous scrapbooks during her lifetime. At age 85, she authored a book on her life and family growing up in Cortland, New York.

In her later years, Joan delighted in spending a day each month with some childhood friends from Cortland going to lunch or dinner in the Tampa area, as well as taking her visiting children and grandchildren to Busch Gardens, Tarpon Springs, the beach, art fairs or shopping in the area. (Sometimes all within 48 hours!). Her life was defined by her unbounded energy, unconditional love of her family, joy for learning, bright smile, service to others, gregarious nature, and kindness to everyone. She will be greatly missed but long remembered by her family members, caregivers, and all those who met her.

Memorials to St. Mary Cathedral Schools or Aspen Ridge may be made through the Nelson Funeral Home, PO. Box 1548, Gaylord, MI 49734.