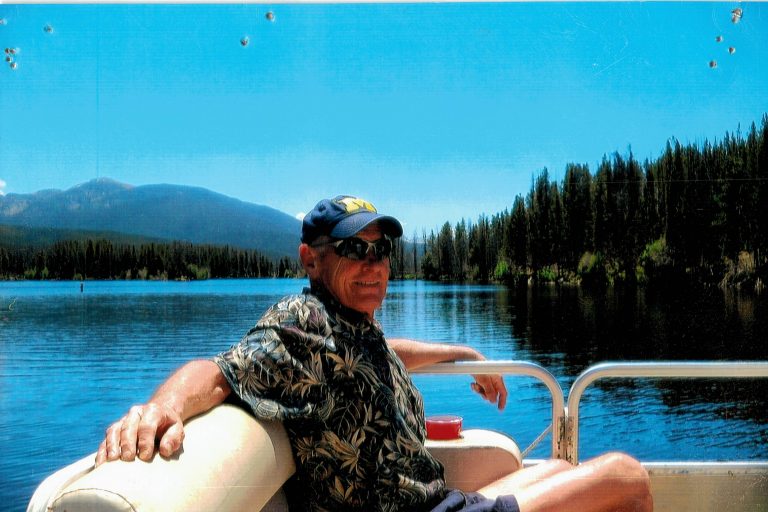 On Saturday, April 10, 2021, Jim Arnshek/Mountian Jim took off on another trail, leaving behind his sweetie Doni to take care. He was home in his cottage in the woods at peace.

Jim turned 74 on April 2nd and was born in Saginaw, Michigan to Geraldine (Gohm) and Edward Arnshek.

Jim was an Arthur Hill graduate, class of 1965. He played football, baseball, and was a great swimmer. After school, he went to work for Wiese Landscaping and Tree Nursery and was an excellent landscaper. Jim continued on with his career in Saginaw and worked at Wilson Machine, B&K Corporation, and Wright-K Technology as a Sales Engineer.

Jim and Doni moved to Angola, IN, and lived there for 25 years while Jim traveled. Upon retirement in 2011, they packed up and moved north to Indian River. Jim finished the cottage to make it home while working part-time at The Bow Hole. He was a member of the Fraternal Order of Eagles 4046 in Indian River for many years, and was one of the “1st Thursday Group.”

He enjoyed just being outside; taking walks with his girls, Moka and Cub.

Jim was a man who “did it all” during his life; hunting, skiing, traveling, kicking the dirt, snowmobiling, golf, and working on his tractor. At the end of the day, he would settle on the deck with a cocktail overlooking the river, with his arms around his sweetie, watching the sunset and being thankful for their life together.

He is preceded in death by his parents, Edward and Geraldine; and his brother, Tony.

He is survived by his loving wife, Doni; family member, Dee Hargreaves; nieces, Shawn and Angela Arnshek; a nephew, Chad (Meg) Arnshek; and a very special goddaughter, Cassandra Bell who he loved and enjoyed spending time with at deer camp.

At Jim’s request there will be no service or flowers, please just share great memories. Memorial donations can be made to the Cheboygan County Humane by mail at 1536 Hackleburg Rd, Cheboygan, MI, 49721, or through PayPal on their website at https://www.cheboyganhumanesociety.org/support-us/Society and McLaren Home Health Care & Hospice online at https://www.mclaren.org/health-management-group/online-donation-mclaren-health-management-group.

When we send him off, we will toast Jim with a shot of Jack and say “See ya, Buddy.”

“Such a wonderful caring man, best friend, and my sweetie will be missed. Thanks Babe.”-Doni Arnshek.