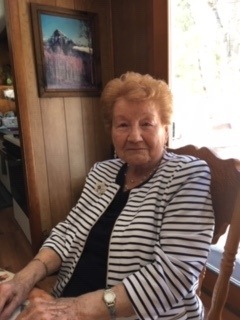 She was born in Frankfort, Germany, on February 6, 1928, to Emil and Sophie Miesel. Hella was married to Alva C. Annis for 32 years and was later married to Raymond Savina, for 27 years.

Hella arrived in America at the age of 20 and lived most of her life in Grayling, where she worked 32 years for the Bear Archery Company.  She also lived in Rogers City and moved to Gaylord in the mid-1980s.  Hella was an active member of Trinity Lutheran Church and loved to knit, crochet, bake and cook.  She volunteered with hospice and enjoyed her work and taking leisurely walks.

In lieu of flowers, memorial contributions in Hella’s name may be made to Hospice of Michigan.