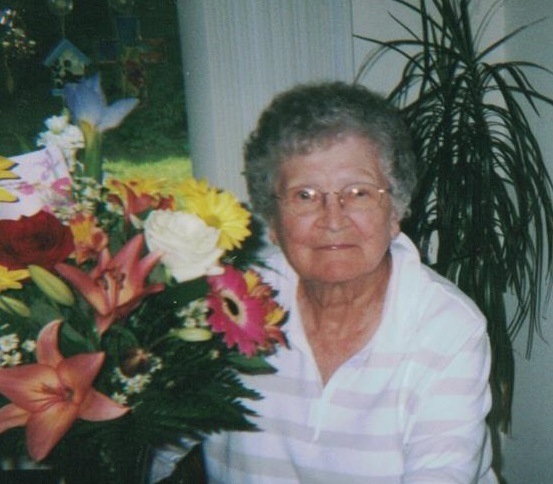 Helen Shev, age 102, went home to be with her Lord and Savior on Saturday, November 30, 2019. Helen passed at home in Gaylord where she had been lovingly cared for by her widowed daughter Joyce Deseck for many years. A memorial service will be held Saturday, December 7, 2019 at 2:00 p.m. at the Nelson Funeral Home with burial at Fairview Cemetery in the spring. Visitation will begin at 11:00 a.m.

Helen was born in Butte, North Dakota, on June 16, 1917, to Chariton “Harry” and Elizabeth (Lalka) Tarasenko. She was the seventh-born daughter and the 10th of 11 children. Helen’s parents had emigrated in 1894 as teenagers from the Kiev District in the Ukraine by way of Virginia and settled near the town of Dogden, now Butte, in McLean County, North Dakota, homesteading and farming 160 acres.

Helen’s sisters were Anna, Rose, Mary, Elsie, Gladys, and Emily. Brothers were Andrew, George, John, and Edward. The siblings were very close, with Helen and sister Emily inseparable. During their school years, they were mistaken for twins by students and teachers. Helen and Emily remained very close until the death of Emily in 1999.

Father Harry, a farmer, was active politically — as a justice of the peace and serving on the local school board. Mother Elizabeth (“Lizzy”) was very busy with washing, ironing, cleaning, cooking, canning, and baking. She also worked in the fields along with the rest of the family. All attended a small Baptist church where Harry began preaching.

When Helen was about 5 years old, the family moved to a farm outside the small-town Clio in Michigan, on the north edge of the automobile manufacturing city of Flint. During the planting and harvesting season, the children were dismissed early from school to help on the farm. Harry periodically would take the vegetables to sell at Detroit’s Eastern Market.

The family became active in a Baptist church in Flint, and on Sundays and holidays, family and friends gathered for a delicious meal. Mother Elizabeth was a fantastic cook.

In 1926, brother Andrew, just 21, died as a result of an automobile accident in which he was a passenger. He was on his way to his job in Flint.

Not long after that, the family moved to Detroit where Harry found employment at Detroit’s Chrysler factory, eventually retiring as a millwright. The family attended the active Russian Baptist Church, which hosted other church congregations for conferences, dinners, and other activities.

Helen graduated from high school at age 16 and was 17 when she married John Jakushevich (name later changed to Shev) on May 11, 1935, in the Russian Baptist Church. Both were very active in the church, singing duets and in trios and quartets. Helen also sang in the choir and played the banjo. John played the guitar, trumpet and mouth organ and led the choir. Helen and John also attended Temple Baptist Church in Detroit and played their instruments in the church orchestra; John also conducted. Both Helen and John were frequent guests on Sparks Christian Radio Station in Royal Oak, singing and playing their instruments.

July 12, 1936, was the birth of Helen and John’s son, John Jr. He later came to be known as Guy, so named by his 2-year-old sister Joyce who was born on Sept. 25, 1938. Sister Sharon was born on Sept. 26, 1945. A few years after Sharon’s birth, the family started to attend Highland Park Baptist Church, a decision made by both Helen and John as their children could not understand Russian.

In the early 1950s, Helen began working at Awrey’s Bakery and the family moved to Redford Township and began attending Covenant Community Church. Brother Keith was born on Dec. 4, 1954.

In 1963, Helen was very busy babysitting 2-month-old grandson Matthew Deseck during the day; in the evenings and on weekends, she worked at Federal Department Store at Seven Mile and Grand River roads. Later, Helen was offered a new job at a higher wage at the Awrey’s Bakery in Wrigley’s Supermarket at Eight Mile and Grand River roads. A bit later, Helen switched to work at Sanders in Farmington.

In 1968, John, Helen and 13-year-old son Keith moved to Gaylord. John found work in various capacities and Helen was a manager at Glenn’s Market for 15 years, retiring at age 68.

The family attended Calvary Baptist Church in Gaylord. Later, John and Helen became charter members of Grace Baptist Church, one of five couples. From the onset, Helen played the piano. As attendance grew, Helen began singing in the choir. In 1996, Helen and John moved to a home on Elmwood Drive.

“A song for Mother” – Faith is a quiet thing, Faith is those mothering. Women who pray and sing, Working away. Hope is an upward look. Hope, at an open Book, Learning how Jesus took Strength for the day. Love is a selfless thing. Love is one comforting, Tenderly shepherding children who stray. Mother, today is yours. Mother, whom God assures beauty we know endures. Bless you, this day. Her children rise up and call her blessed. – Proverbs 31:28