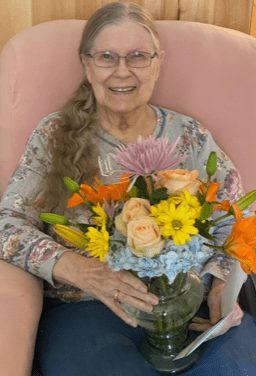 On October 9, 2020, Geraldine Ruth (van den Hoek) Gerred, beloved wife, mother, and grandmother went to be with her Lord and with her soulmate, Bob, at the age of 84.

Geraldine, known affectionately as “Gerry” by her family and friends, was born in Detroit, Michigan, on September 29, 1936, to Roelof (Bud) and Ruth (Richards) van den Hoek.  She was the oldest of three children born to the van den Hoeks.  She attended school in the Detroit area until she and her family moved to Wolverine in 1951.  There she graduated from Wolverine High School in 1953.  She attended Michigan State University for one year, then married Charles D. Demerly in 1955.  They raised three daughters, Michelle, Kathleen, and Marta.  Both Gerry and her husband worked for the Clawson, Michigan Post Office for many years.  Their marriage ended in 1976; she then fulfilled her dream of higher education, completing an Associate’s Degree from Oakland Community College.  Gerry then moved back to Wolverine, where she met and married Robert L. Gerred.  They were married for 28 years until Bob’s death in 2016.  She and Bob lived in Alanson, then in Petoskey, where she was employed as a receptionist in Dr. Huebner’s office in Petoskey, Michigan until her retirement.

Gerry was so talented and creative!  She loved music and played the piano beautifully, providing music for the Clawson Methodist Church for many years.  She also was an avid craft person; she loved to paint, make her own soap, work in stained glass, and was often engaged in some form of fiber art.  Gerry loved to read and was rarely without a book in her hands or stashed in her purse in case she had to wait in line somewhere.  She loved to go to the movies, especially if there was an action or a superhero movie scheduled.  Hers was an indomitable spirit, yet she loved to laugh and had an amazing sense of humor.  In her later years, she preferred a peaceful life, living simply and enjoying the little things that make each day wonderful.

Gerry was preceded in death by her parents, and her loving husband, Bob.

A memorial service will be held on October 24, 2020, at 1 p.m. at the Wolverine Congregational Church, with graveside immediately following at Silver Lake Cemetery.

In lieu of flowers memorial contributions may be made to the American Heart Association, 3816 Payshere Circle, Chicago, IL 60674 or the Otsego County Animal Shelter, 256 Fairview Rd., Gaylord, MI 49735.