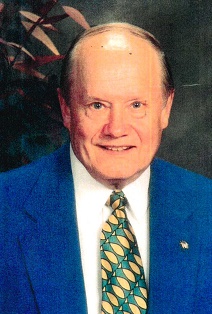 Frederic Charles Lickteig, 88, went to be with his Lord on April 16, 2021. Fred was born in Grosse Pointe Farms, Michigan, September 13, 1932, to Frederic and Emily Lickteig. After serving four years in the U.S. Air Force, he attended Ferris State University, College of Pharmacy, in Big Rapids, Michigan. He married his wife of 64 years, Laura Lindsay, before he graduated.

He enjoyed a long career as owner of Alpine Village Pharmacy in Gaylord, Michigan. After his retirement from pharmacy, Fred and Laura became the owners of The Word Bookstore and enjoyed their new business for 14 years. During Fred’s years in Gaylord, he was actively involved in the Gaylord Rotary Club and the Gaylord Area Chamber of Commerce, he served as president for each of these clubs. Fred was also active in the Kiwanis Club, Lions Club, Gaylord Alpenfest Committee, and was a member of Evangelical Free Church.

After two years as “snowbirds”, they settled permanently in Surprise, Arizona in 2003. While in Arizona, he was an active member of the Civil War Roundtable, Grand Central Railroad (outdoor train group) in Sun City Grand, and Trinity Bible Church, Sun City West.