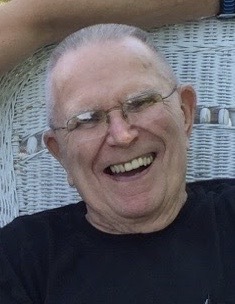 Flint Grieves Stuart passed from this world on June 1, 2020, a day before his 87th birthday, following two years of decline but only several days of not being up in his wheelchair and joking with staff at Gaylord Medilodge. Born in 1933 (with his great-grandfather Dr. William Flint attending) he was the son of Gerald and Marion (Grieves) Stuart of Perry, Michigan. He was the second of four brothers, who all played sports at Perry High School, following in the tradition of their father, Gerald. Flint was the proud father of eleven children. A tool and die maker at Oldsmobile, after 20 years he continued there as he and his wife, Katie also brought the Ben Franklin Store to Perry and ran this business successfully for many years. He was a huge education booster, serving as Secretary of the Perry School Board for several years and also Treasurer of the Perry Athletic Boosters. His children remember the many camping vacations through the years, especially trips to the Boundary Waters Canoe Area for week-long adventures. Despite his early hatred of cats, he spent his later years in Frankfort, Michigan living with his niece, Jeryl (Stuart) Colby at Colby’s Orchard House Assisted Living with three cats as his companions, watering the begonias and driving residents to their physical therapy, doctor and hair appointments. When it was time, this car-loving Oldsmobile guy shocked all of us and voluntarily handed over his keys and sold his car.