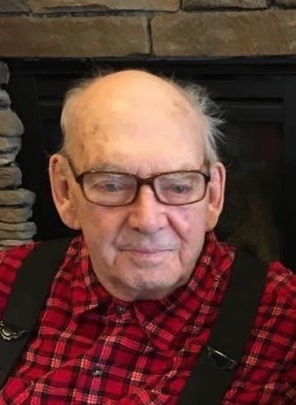 Elmer Ashley, 90, of Vanderbilt, Michigan passed away in the loving arms of his wife at Aspen Ridge Retirement Village in Gaylord, Michigan on July 18, 2019.

Elmer was born in Cheboygan, Michigan on March 14, 1929, to Warren and Grace (Sackrider) Ashley.  He was raised and spent his entire life in Vanderbilt and Gaylord.  On March 20, 1947, he married Adeline Guerin.  Together they raised four children; Duane, Gary, Douglas, and Sandra.

He worked for the state of Michigan as a maintenance man at the Alpine Center in Gaylord and the Oden Fish Hatchery, retiring in 1984.

In his free time, Elmer cherished his travels with Adeline, and they visited 46 states during their life together. They enjoyed making it to Alaska a decade ago as their final big trip, only the New England states eluded them. He also enjoyed deer and small game hunting, and for over 40 years his annual fishing trip to Canada with his friends, sons, brother, nephews, and grandsons.  He was an avid gardener, loved all forms of card games, and bowling on Monday and Friday night leagues at the Gaylord Bowling Center for decades.

In lieu of flowers, the family asks that memorial contributions be sent to the American Cancer Society or the National Parkinson’s Foundation, in his honor, through Nelson Funeral Home, PO Box 1548, Gaylord, Michigan 49734.