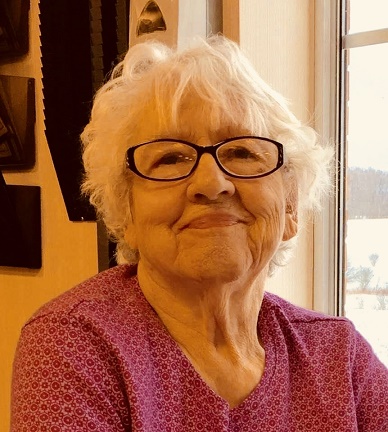 Eleanor was born in Elmira on February 13, 1928, to Louis and Stella (Franckowiak) Kolasa. Her father died before she was born. Eleanor lived a full and happy life with her mom and stepfather, Frank Prusakiewicz, on the family farm.  She had many fond memories of her beloved mother Stella, who was killed in a car accident when she was young.

She cherished her brothers and sisters and enjoyed being the oldest “sis”. Many stories were told of their walks to the local schoolhouse, and how Eleanor spoke only Polish for the first few years of school.

She regaled her family with stories of fudge making, her sister Betty playing the accordion and piano, and her brother Don working the fields. Their farm was primarily a potato farm.  Eleanor often spoke of the hard work and the joy of being a close-knit family.

She helped her parents on the farm until she married Nicholas Kucharek of Elmira, November 10, 1947.  They lived in the suburbs of Detroit where she had many small jobs but was devoted to raising her young sons. She loved telling stories of her time in Detroit and her job at Good Humor Ice Cream.  She also worked at Standard Products for a time and was an Avon lady, among other direct sales.

The family returned to Northern Michigan and resided at the Kucharek family farm in Elmira. They spent over 30 years working side by side. Although she fancied herself a “city girl” she took to farming. She named her chickens, her favorite turkey, and her many cats.  Three daughters joined the family in subsequent years.

Eleanor was Polish and it was rare to not have the Sunday polka station tuned in.  She was a hard worker but was ready to share a laugh and a good time.

Her favorite things were berry picking and going to the beach for an old-fashioned picnic. She loved rock hunting, going to the Upper Peninsula for smoked fish, fishing, traveling, and gardening.  She also loved the holidays, baking sugar cookies from scratch, and many Polish recipes.

She had a large extended family who spent hours around the kitchen table, coffee cups in hand, speaking Polish and laughing.

Eleanor was preceded in death by her husband, Nicholas in 1982.  She later married Edward Kuras of Gaylord. They spent over 20 years together.

In addition to her first husband, Nicholas Kucharek, she was also preceded in death by her second husband, Edward Kuras in 2005; her beloved daughter, Sandra (Kucharek) Wehner Metzger in 2020; and her brothers, Edward Prusakiewicz and Bernard Prusakiewicz.

Memorial contributions may be made to the Charlevoix County Humane Society for the care of their cats.