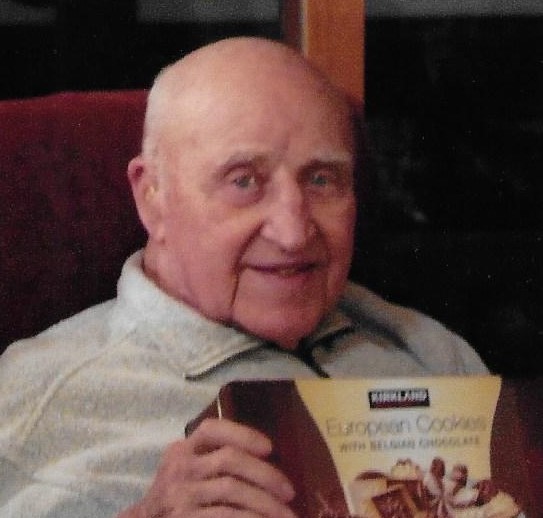 Edward Henry Steinman, a Coast Guard veteran of WWII, died suddenly on January 21, 2021, at the age of 97.  He lived his entire life with fierce independence, determination, honesty, and integrity. He was generous, kind, and smart.

Born in Wyandotte, Michigan in 1924, he grew up to marry his high school sweetheart, Virginia Herrmann (Shelley’s mother), and was embraced by the Herrmann family. Virginia died in August 1950.

In June of 1953, he married a widow, Edith Todd, with 3 children of her own; Mark, Paul, and Nancy. They blended their family together, built a home, and along came Claire.  They both enjoyed long teaching careers in Belleville, Michigan. Edward started out as a math teacher. He retired as Director of Guidance at Belleville High School, with 2 master’s degrees. Years after retirement, many students still corresponded with him.

He liked to read and fish (once in his later years, fishing with a good friend off a bridge from his car).  He golfed well into his 80’s and ran the Men’s League at Gaylord Country Club for many years. He was fond of college football, basketball, and baseball.  U of M was his favorite. He liked to watch Little League championships and got a kick out of players trying to spit.  He liked to carve and was often studying to lead the Men’s Group discussions at the First United Methodist Church in Gaylord.

He gave all five kids the experience of college.  He and Edith retired to Gaylord in 1977, to the home they built and loved on Dixon Lake. He could build anything.  Mechanical engines were easy to him, although electronics baffled him a bit.  He made many friends and cared about them.

As he aged, Edward faced many physical challenges, including the loss of his hearing and voice. With typical determination, he still found ways to communicate and get around.  Thumbs up was a good sign.  He resolutely endured this last year of quarantine, visiting with friends and family through a patio door.

The family hopes to plan a memorial service in the spring or summer.