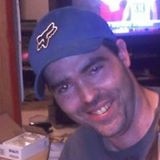 David lived in Gaylord at the time of his death and was a lifelong resident of northern Michigan.  He was born in Charlevoix, Michigan on July 10, 1978, firstborn son to his father, Kenneth Edward Lashuay, and his mother, Cathleen Myrtle (Schoolcraft) Lashuay (who preceded him in death).

David attended Gaylord Community Schools and Porter Creek School.  He was a talented “jack of all trades” but, especially excelled at carpentry and was a hard and dedicated worker.  He greatly enjoyed all things outdoors, had his Mom’s heart of gold and quickly became loved by all he encountered. Above all, he dearly loved his three sons and was the proudest parent imaginable.

Funeral services will be held at 1:00 p.m. on Thursday, May 2, 2019 from the Nelson Funeral Home in Gaylord, with visitation beginning at 11:30 a.m. until the time of service.  Interment will immediately follow at Maple Hill Cemetery in Elmira, Michigan. A luncheon reception celebrating David’s life will be held at approximately 3:00 p.m. at the Hayes Township Hall, 5 miles west of Gaylord at the intersection of M-32 and Hayes Tower Road.