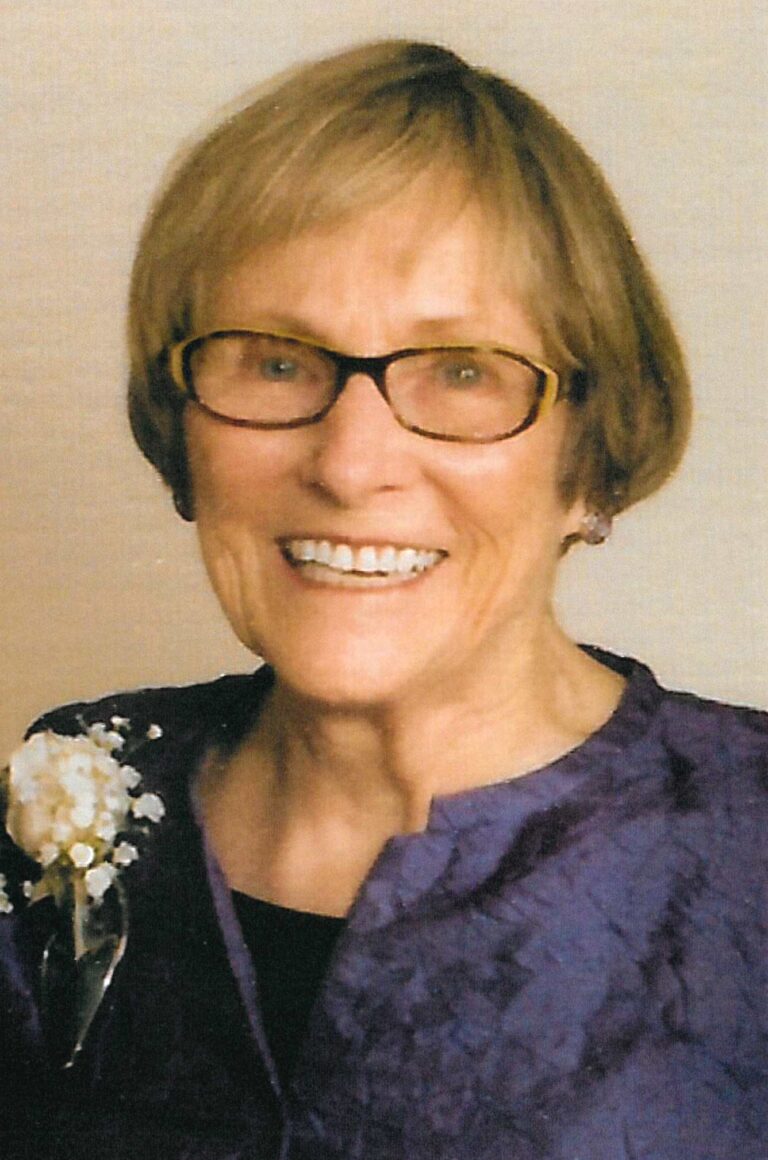 Cynthia Louise Postmus, 84, of Charlevoix, Michigan, died on July 26, 2021, at Munson Hospice in Traverse City while listening to her alma mater, “The Maize and Blue.”

She was born November 15, 1936, in Charlevoix, Michigan, the daughter of the late Vane Howard and Mildred (Voorhies) Smith. In 1954 she graduated from Charlevoix High School, where she was class salutatorian. She attended the University of Michigan on a Regents Scholarship graduating in 1958 with a Bachelor of Science in Nursing degree.

Cynthia married Roger W. Postmus in 1958, just celebrating 63 years of marriage in July. They settled in Ann Arbor, Michigan, where Roger pursued his residency, then established a private practice in obstetrics and gynecology. She loved Ann Arbor and the university, particularly the athletic teams and her alumnae groups. They had season tickets to football, basketball, and hockey games and enjoyed cheering on the Wolverines in the stadiums at away football games and Michigan bowl games. In 1970-71, Cynthia was president of the University of Michigan Margaret Waterman Alumnae Group, whose primary purpose was to raise money to provide scholarships for deserving University of Michigan women. In Ann Arbor, she was also an active member of the Ann Arbor Thrift Shop, St. Joseph Mercy Hospital Auxiliary, the University of Michigan Nurses History Group, Ann Arbor Women’s City Club, First Congregational Church, and Ann Arbor-Dexter Antiquarians.

Throughout their married life, Cynthia and Roger maintained their connection to Charlevoix. Cynthia loved her hometown where she had family and many lifelong friends. Her daughters loved spending time here and fondly remember their mom keeping them busy with summer craft projects and the times she took them fishing at the old railroad bridge near the Coast Guard Station in Charlevoix—she even collected leeches and put them on their fishing hooks. In 1996, Roger retired, and they moved permanently to Charlevoix. Cynthia was very active in the Charlevoix Public Library and served as a board member, helped establish the Michigan Room Committee, and devoted many hours to the building of Charlevoix’s beautiful library (which was originally the grade school she attended where her mother was her 4th-grade teacher). Her Northern Michigan memberships included the First Congregational Church, the Petoskey Area Antiques Club, Questers, and the Charlevoix Historical Society.

Cynthia had a passion for the art of rug hooking. She designed many of her rugs and dyed the wool she used to create unique floor and wall works of art. She attended many rug hooking conferences and workshops where she met people who became lifetime friends. Other interests included classical music, antiques, travel, museums, reading, art films, PBS British programs, local history, and mastering her computer. She had an extensive collection of vintage Charlevoix postcards. Cynthia will be remembered for her impressive garden where she dedicated many hours that also showed her artistic talent. Throughout her life, Cynthia was devoted to her pets and had many memorable cats and dogs, especially her Bernese Mountain dogs, Phoebe, Hubble, and Jack, and her beloved cat, Edward.

Cynthia and Roger were the parents of three lovely daughters, Elizabeth, Holly, and Katie. She was a stay-at-home mom and was always busy with the many activities involving her girls. Cynthia was a devoted grandmother and enjoyed her relationship with four wonderful grandsons; in January 2021, she became a great-grandmother.

Cynthia was preceded in death by her parents, Vane H Smith and Mildred Smith Paddock; and grandparents, George W. and Minnie J. Smith, and Ella Voorhies.

The family thanks the compassionate staff at Munson Hospice House for the care that Cynthia received.

Her wish was to be cremated and buried in Charlevoix’s Brookside Cemetery. A private burial and memorial celebration of Cynthia’s life will be held on a date yet to be determined.