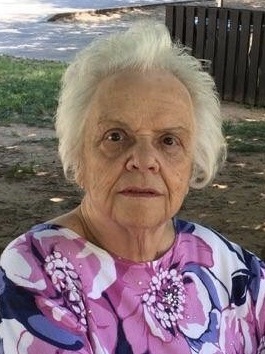 Gloria Alice Clink, 84, of Greenville, SC, died Monday, May 21, 2018 at her assisted living facility The Haven in the Village at Chanticleer, surrounded by her loving family.

Gloria was born January 9, 1934 in Cambridge, MA, to parents Frank & Mary Cossette. She married Carl Boris in Cambridge, MA in 1954, and later married William Clink in Petoskey, MI in 1978. Gloria was employed by Burns Clinic in Petoskey, and later by Northern Star Publishing in Boyne City, MI. Her hobbies included ceramics, knitting, playing bingo and enjoying the music of her earlier life. She was a very active member of St. Mary’s catholic church in Gaylord, where she deeply cherished serving as Eucharistic Minister, and leading a rosary and bible study group.

She is preceded in death by her parents; brothers Frank and Edward; sister Rita; and husbands Carl and William.

Gloria enjoyed a simple life of service and sacrifice to others, and loved to practice and share her faith with everyone.

A Mass of Christian Burial will be held at St. Mary Cathedral in Gaylord on Friday, May 25, 2018 at 11am. Visitation will be held prior to Mass from 9:30 until the time of service.

Interment will take place at Greenwood Cemetery in Petoskey at 3:00 pm.

In lieu of flowers, donations may be made in memory of Gloria to the Alzheimer’s Foundation of America.