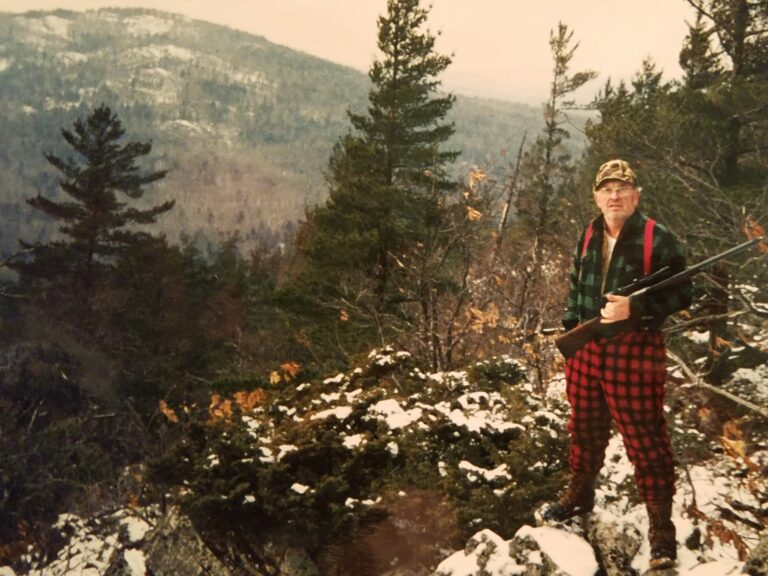 On June 17, 1950, in Dearborn, he married the love of his life, Charlotte Thayer. After a brief honeymoon to Sugar Island, they returned to the Kassuba homestead in Gaylord and raised seven children. Chum and Charlotte were married 71 years.

Chum never tired of looking out his living room window at “his” lake, the house he was born in, and the wildlife that visited him daily, especially the birds and squirrels.

Chum was one of the best fly fisherman to ever wet a line. He had his favorite fishing hole on the Black River and loved an early morning fishing trip. He would often take his cast iron frying pan and cook his breakfast of brookies and rainbows on the riverbank. He also tied his own flies and if you were lucky enough to go fishing with him at his “secret spot,” you were practically blindfolded.

Chum also loved to fish on Kassuba Lake, snowmobile, mushroom hunt, hunt for elk horn sheds, and garden. He prided himself in having the biggest tomatoes and the most beautiful flowers.

Chum also spent time enjoying hunting and fishing in the Pigeon River Forest. Many of his children learned to hunt there, not to mention learning to “hang on” as a ride with Dad on a narrow trail was always an adventure.

In his early years, he peeled cedar logs for his brother, George, and helped build many log cabins in the area, including the former Ken Mar on the Hill, now known as Marsh Ridge.

Chum was a highly successful hunter and loved to share his love of nature with everyone he met, but especially his children and grandchildren. His home was filled with pictures of him on mountains, lakes, rivers, and streams, and the occasional mud hole. His best days were spent hunting in Big Bay, with his eight older brothers, and later his four sons. Chum was able to go “up north” hunting for 71 years until he was 89 years old. His sons had trouble keeping up with him in the woods.

Chum worked for Rowley’s, later known as Red Wing Products, for 51 years, retiring at the age of 75.

After “retirement “, he became an elk guide with his brother, Lou, and later friend, Bill Blanzy. Together, they had a 98% success rate for the dozens of hunters they guided. He often laughed when, well into his 80’s, the younger elk hunters could not keep up with him, while running the ridges, in search of elk.

Due to the rise in COVID-19 cases, there will not be a luncheon after the service.

In lieu of flowers, memorial contributions may be made to St. Mary Cathedral Schools.