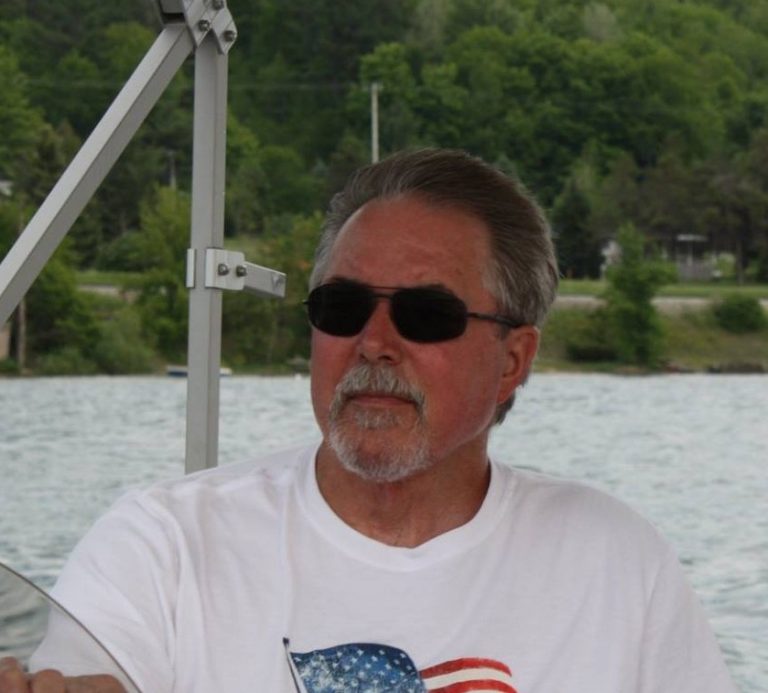 The founder of the Knucklehead Club – Gaylord Chapter, William “Bill” Charles Einkorn, aged 67, of Gaylord, passed away on July 31, 2019.  He was surrounded by many of those that he loved most in life.

Bill served honorably in the U.S. Navy from 1971-1975, and was a veteran of the Vietnam War.  He was always proud to have been of service to his country.

Bill’s life was forever changed on August 2, 1992, when he attended a singles dance and had the courage to ask out a single lady with 5 children and a grandchild.  Their first date was August 5, 1992, and 10 months later, Bill married Debra (Head) Coonrod on June 5, 1993.  It was not easy for a “California Boy” in short shorts and sandals to make his way into the hearts of all of the “Head” family at once, but soon they were all working it out.  At that time Bill was working at Weyerhaeuser where he worked from 1986-2009.  Debi and Bill recently celebrated their 26th anniversary.  In those 26 years, Bill asked that Debi help him get ready for Heaven and he would help her here on earth.  They have both kept up their end of the bargain!

Everyone has lots of great memories of Bill and cherish the lessons that he taught us.  As Founding members, Papa and Olivia would not easily share all of the rules on how to become a member of the Knucklehead Club.  A few rules were you had to love flowers, Reeses and you had to like KFC original recipe!  Olivia, Trent, and Griffin spent a lot of time with Papa and they will tell you, Papa was loved.

In addition to his one-true love Debi, Bill is survived by his sisters, Geri and Jacki, brothers & sisters-in-law; Bill Head, MeLissa (Dick) Olson, Larry (Helen) Head, Janis (Marvin) Smith, Ron Head and Deidre (Steve) Stewart, children; both his and hers, Nicole, Nathan, Shannon(Theresa), Justin, Nicole(Phil), Josh(Nikki) and Jamison, grandchildren; Ashton(DJ), Ty, Cade, Daniel(Monica), Katelyn, Michael, Kaleb, Connor, Trent, Griffin, Taylor, Teagan & of course the other Founder of the Knucklehead Club – his youngest granddaughter – Olivia.  Bill had one special son-in-law and best-friend, Phil Lompra who has been a wonderful and amazing caregiver over the last years. Now as you can imagine there are a couple of great-grandchildren, too – so we want to include Brinley, Wrenna, Danielle, Carter, Kanen, and Eli.  Also surviving are many nieces and nephews and grand-nieces and nephews.

Bill was preceded in death by his parents (LeRoy Einkorn & Irene Larson), his parent-in-law (Bill & Dolores Head), his brother Roy and his niece Amy.

The family wishes to thank the staff of Hospice of Michigan, Rev. John Naile, Rev. Dan Bowman, Pastor Scott Distler and the many friends and family that called and stopped in for the care and concern during Bill’s confinement.  We appreciate each of you.

There will be a gathering at the Einkorn residence on Saturday, August 10th from 11:00 a.m. to 4 p.m. to receive friends and family and celebrate the Life and Love of Bill Einkorn.  Please feel free to stop in to share a story or prayer with us at that time.

Memorial contributions can be made in Bill’s name to Hospice of Michigan.