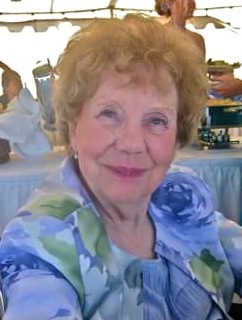 Marilys June Bergquist, beloved mother, grandmother, and great-grandmother passed away March 16, 2018, while held in the loving arms of her Savior, Jesus Christ, at the age of 95.

She was the daughter of Daniel and Hazel (Sibley) Raess.

Marilys graduated from Euine High School, attended Northern Michigan University for a year studying to become a nurse.  She then attended Escanaba Business School and was later employed by the Michigan Conservation District in Escanaba.  After her marriage, she worked at “The Fair Store” in Escanaba and sold hats in the women’s department.  When the family moved to Green Bay, Wisconsin in 1960, Marilys worked at Wisconsin Bell Telephone as a key punch operator.  In 1964 the family relocated to Gaylord, Michigan where she would live for the next forty years. Here she worked at Otsego Ski Club/Hidden Valley as a front desk receptionist and business clerk for nineteen years.  She spent her later years in Saginaw and Oscoda living close to her daughter, Lynda.

Personally, Marilys brought happiness to everyone she encountered, always offering a friendly greeting and smile. She was a classy lady who carried herself with grace in the most approachable way.  She always dressed to the nines and had her hair done to perfection once a week by her dear friend Rosalie Makarewicz.  She loved spending time with her friends and did so often as a proud member of her philanthropic sorority, Beta Sigma Phi.  She was a faithful parishioner of Peace Lutheran Church in Gaylord.  She was an avid reader and loved a good card game. She rooted on the Green Bay Packers and Michigan State University and rarely missed watching a game on TV.  If there was a social gathering with friends or family that involved chocolate or ice cream, she wanted to be a part of it.

Marilys loved her family and served as the most amazing role model for her children who admired and loved her with their entire hearts.  She was a person to be admired and an inspiration to others.  She was a strong survivor, humble, kind, and loving.

Visitation at the Nelson Funeral Home  will be held on Monday, March 19, 2018 from 2PM – 8PM.  Visitation will continue Tuesday (March 20) at Peace Lutheran Church from 10AM until the time of services.

Memorial contributions may be made to Peace Lutheran Church or Hospice.