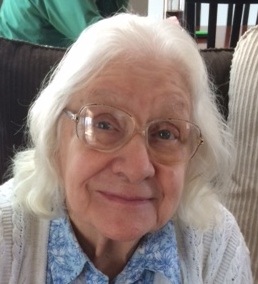 Joan “JoAnn” Bandfield, of Vanderbilt and Gaylord, died April 4, 2018. Joan had been a resident of Craft Assisted Living/Care Home in Mason, MI, where she died peacefully in the presence of family and friends.

Joan was born in Lansing, MI, on November 18, 1926, to LeRoy and Myrtle (Fryatt) Barnes. She met and married her husband, Bill Bandfield, in Charlotte, MI, in 1947, and joined him in the ownership and operation of Bandfield’s Grocery, Vanderbilt, between 1964 and 1984. Joan was an enthusiastic Bingo player and enjoyed an occasional trip to the casino. Joan had a smile for almost everyone, even unto her death. Joan moved to  Mason, MI in 2015, to be near her daughters.

She was preceded in death by her husband; parents; sister, Wilma Tyson; her only son, Tom; and son-in-law, Richard Bottomley.

A Mass of Christian Burial will be held at Holy Redeemer Church in Vanderbilt on Monday, April 9, 2018 at 1pm, with visitation beginning at 12pm.

Visitation will be held at the Nelson Funeral Home on Sunday, April 8, from 4pm until 6pm.

The family would like to thank the wonderful staff members at Craft Assisted Living/Care Home and Great Lakes Hospice for the excellent care given to Joan.  In lieu of flowers, contributions can be made to Great Lakes Hospice or Holy Redeemer Church in Vanderbilt, through the Nelson Funeral Home.