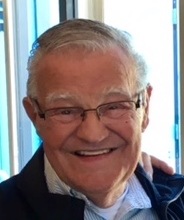 In 1973, they moved to Wolverine, where they built their home and raised a family of three girls.  Ron worked for U.S Plywood (later known as Georgia Pacific) in Gaylord, MI until it was time to retire in April, 2004.

Following his wife’s death, he moved north to Hessel, MI, to be closer to two of his daughters, where he loved spending time with his children and grandchildren. While living in the Upper Peninsula, he enjoyed fishing and learning how to play the drums of his native Indian roots. He so enjoyed deer hunting, fishing, playing and coaching softball.

In 2015, he was given an honorary name from the Minnesota Chapter of the Mendota Minnesota tribe in a naming ceremony with a fitting name, Eagle Goodheart, which was a great honor for him.

In death, he is preceded by his wife of 50 years G. Jean (Sumerix) Poupard, his son R. Eric Scott Poupard, his brothers Gary and George Poupard and his parents George J. Poupard and Margaret K. Haley.